Today, I'd like to introduce you to a new author friend of mine, Cara Meredith. She's a writer, wife and mother with a passion for helping people look past the superficial and love each other because we're all made in the image of God.

Allow me to officially introduce Cara Meredith via words from a press release by her book publisher, Zondervan:

When writer Cara Meredith, who is white, married James Meredith, the son of civil rights icon James Howard Meredith, she learned that the idea of a “colorblind” or “post-racial” society was a naive myth.

Loving James meant coming face to face with the pain of injustice in his life, and in the lives of other people with black and brown skin, she writes in her new memoir, The Color of Life: A Journey toward Love and Racial Justice (Zondervan, February 5, 2019). It’s a story of love, history, and justice that illuminates the path from white privilege toward racial healing, from ignorance toward seeing the image of God in every person.

Growing up in suburban Oregon, Cara’s family “didn’t engage with problems of race because it wasn’t our battle to fight,” she recalls. “Those of us who identify as white can choose not to notice.” Now she has to be willing to hold the pain of her husband’s experience. She began to listen to the stories of others in a new way.

In The Color of Life, she asks, how do we navigate desperately-needed conversations about race? How do we teach our children a theology of reconciliation and love?

Read on for my interview with Cara Meredith about her debut book that releases today! Wish her a "Happy Book Birthday" in the comments section toward the end of this interview.

~*~
Interview with Cara Meredith about her book,
The Color of Life: A Journey toward Love and Racial Justice

Alexis: What or who inspired you to write this book?

Cara: Honestly, this is the book I never thought I would write. I left the traditional work force six years ago to care for our oldest son and pursue a long-held dream of writing and speaking full-time. During those first couple years of dipping my toes into the water of writing, I wrote another book – a memoir about being a woman in ministry, leaving ministry (and having a crisis of faith) and becoming a mother. I tried to sell the book to agents and publishers alike, and I don’t even think “crickets” could accurately describe the lack of response from the publishing industry. But then, three years ago a long form essay ran and went viral – and that story eventually became this story expanded in The Color of Life.

I wish I could say that there was a profound moment of discovery and of realizing that this was the story I needed to write, but after such a (mostly) positive response from readers and from those in the industry, I realized that people were hungry to hear more. I suppose it served both as a wake-up call and as inspiration to tell the story of my journey toward love and racial justice.

Alexis: What do you mean when you say that you “grew up in a colorless world?”

Cara: As a child of the eighties, I grew up in a mostly white, suburban environment; partially in reaction to seeing “too much” color at the height of our country’s history of slavery and Jim Crow segregation (among other movements against the African American community in particular), many school districts and churches swung to the other side of the pendulum and taught a colorblind rhetoric. I was taught not to see color – not in school, not at church, not in the world around me. The heart mattered more than anything else, so I was taught not to see racial and ethnic differences in the world around me.

Alexis: What do you want readers to remember most about The Color of Life?

Alexis: Would you say that being “colorblind” is a good or bad way to view people of color? Explain.

Cara: Adopting a colorblind mindset is not helpful for any of us – not for people of color, nor for those who identify as white. When it comes to my religious tradition, I can’t help but think about how Jesus honored and celebrated the particularities of everyone he interacted with, and those particularities included a profound dignity toward gender, ethnicity and race, to name a few. Regardless of individual beliefs, I think we humans are then invited to do the same and honor the particularities of one another, which includes our racial, ethnic and cultural identities.

Alexis: In what ways do you think that the Christian church can help people of color when it comes to their daily struggles that are caused by various forms of racism, injustice and systematic oppression?

Cara: First, I think the Church can help by starting to listen to the voices of those we haven’t always listened to in the past – and hopefully in the midst of listening, learning and listening some more, the Church will come to recognize that various forms of racism, injustice and systemic oppression is not just a thing of the past, but a reality of today. As my friend Roy Garanton of The Rooted Collective says, perhaps this means the Church will then move beyond mere diversity and inclusion to full equity, when there is shared power of people of color in leadership.

Alexis: Tell us about your father-in-law and his iconic role in the Civil Rights Movement. In what ways has his work been an inspiration to you?
Cara: Sure! My father-in-law is a man named James Meredith, and he was the first black man to integrate into the University of Mississippi in 1962. That is probably what he is most well known for, but the event he would say he is most proud of was the Meredith March Against Fear, which happened four years later in 1966. Of the latter, he was shot on the second day of the march, but as a result, Dr. Martin Luther King, Jr., Stokely Carmichael and other key leaders of the movement came to his aid, and continued to march for and alongside him, in an effort to eradicate fear amongst black voters in the state of Mississippi. His work is an inspiration to me because he is the epitome of courage – I doubt myself far too often, but he continues to march on, fearless as to what other people might think of him.
Alexis: When you first started dating your husband, were you concerned about how people would view you as an interracial couple? Why or why not?
Cara: I think I would describe myself as blissfully unaware when we first started dating, perhaps more in love with what we looked like on the outside than who we were together. I did wonder whether both of our families would accept us as an interracial couple, but even that wondering was erased as soon as we traveled to our respective home states and met each other’s people. Otherwise, on our own turf, we lived in a more progressive area of the country – so because I (at that time) believed we lived in a post-racial environment, I wasn’t concerned about how friends or strangers in the San Francisco Bay Area would view us.
Alexis: Now that you’re married and have children who are biracial, what do you and your husband teach them about their identity as biracial children living in America?
Cara: I write about this a fair amount in the book, but we try and help them understand their fully black and fully white selves. We also understand that how they choose to identify someday as teenagers and adults might be different from how society chooses to identify (or label) them. In the meantime, we don’t shy away from conversations of race or racial identity, so oftentimes the dinner hour or those precious moments before bedtime are filled with the weightiest and most beautiful of dialogue.
Alexis: How did falling in love with a Black man affect or change your views on people of color and their experiences in America? Explain.
Cara: I can only hope to give credence to this question, but is not an “us” and “them” anymore, in the sense that “they” are not “the other.” I realize that I just used a whole lot of quotation marks to emphasize a point, but the truth is this: his pain has become my pain, and the pain of his people my people. I weep at the myriad of injustice and oppression my husband has had to fight against everyday of his life, and I realize that his is not the exception but the norm. I can only hope to move forward with eyes and ears open to seeing, hearing, absorbing and being changed by the reality of these experiences.
Alexis: Why do you think that conversations about race in America are “desperately-needed?”
Cara: The answer is simple: Until we no longer have to have these conversations, we have to have these conversations. And given the current political climate and overwhelming sense of division in America today, it’s high time every single one of us stepped into conversations of race.
Alexis: Thanks for the interview, Cara! Would you like to share closing thoughts?

Cara: Nope, I’m good! Thanks again for reading. I hope our conversation today sparks necessary conversation amongst each one of your readers.

Cara Meredith is a writer and speaker whose work has appeared in numerous print and online publications, including Christianity Today, iBelieve, and For Every Mom.

She writes the Coloring Outside the Lines blog for Patheos.com.

A former high school English teacher and outreach ministry director, she holds a Masters of Theology from Fuller Seminary.

Cara lives in the Bay Area with her husband and two sons.
The Color of Life: A Journey toward Love and Racial Justice
by Cara Meredith 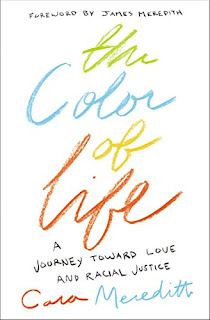 Cara Meredith grew up in a colorless world. From childhood, she didn't think issues of race had anything to do with her. A colorblind rhetoric had been stamped across her education, world view, and Christian theology.
Then as an adult, Cara's life took on new, colorful hues. She realized that her generation, seeking to move beyond ancestral racism, had swung so far that they tried to act as if they didn't see race at all. But that picture neglected the unique cultural identity God gives each person. When Cara met and fell in love with the son of black icon, James Meredith, she began to listen to the stories and experiences of others in a new way, taking note of the cultures, sounds and shades of life already present around her. After she married and their little family grew to include two mixed-race sons, Cara knew she would never see the world through a colorless lens again.
A writer and speaker in an interracial marriage and mixed-race family, Cara finds herself more and more in the middle of discussions about racial justice. In The Color of Life, she asks how do we navigate ongoing and desperately-needed conversations about race? How do we teach our children a theology of reconciliation and love? And what does it mean to live a life that makes space for seeing the imago Dei in everyone? Cara's illuminating memoir paints a beautiful path from white privilege toward racial healing, from ignorance toward seeing the image of God in everyone she meets.

~*~
Buy Cara's book on Amazon or Barnes and Noble